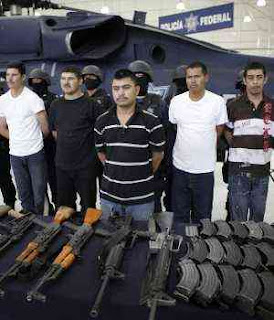 EU asks for Mexico combatting the narco with hard hand
Anthony Placido, official of the DEA, you insured than the power of the cartels of drug trafficking would be able to grow without hard hand and becoming a bigger threat for the certainty of Mexico

EU’s Government reaffirmed this Wednesday its support to the anti-narcotic efforts in Mexico and noticed than without hard hand, power and the drug traffickers’ impunity would be able to become a bigger threat for the national security at that country.
That way you indicated it in the U.S. House Of Representatives’s audience of the subcommittee of National Security, Anthony Placido, assistant director for subjects of intelligence of the North American Antidrugs Management ( DEA ).
A safe and stable Mexico is something that you are interesting so much to EU like to Mexico, but the violent actions and the corrupting influence of the organizations of drug trafficking threaten that certainty, Placido in his testimony underlined .
Else the drug trafficking is combatted with a heavy hand, power and the impunity of these criminal bands would be able to grow and becoming a bigger threat for the national security of Mexico, said .
That’s why our alliance with low Mexico is vital the Iniciativa Mérida ( a fair plan to combat the drug trafficking and organized crime ) and our joint responsibility to face up to this threat, the official underlined .
The audience produced herself in moments in that you increase the popular dissatisfaction for the narcoviolencia in Mexico, to the one that the president Felipe Calderón answered, in 2007, with the shipment of over 45 thousand cashes and police agents to the more points hit by drug trafficking.
In spite of the heroic efforts of Calderón’s Government, there has been approximately 17 thousand 900 deaths related with the drug trafficking in Mexico, you indicated .
Been pleased by you described the shadowy panorama be more than enough that means the drug trafficking at the common frontier’s both sides: In Mexico, the concept of silver or lead is all right established in the narcos’s culture and the narcoviolencia undermines the public confidence in Government.
At United States, you said, the drug abuse collects the life itself of over 31 thousand people a year.
The Iniciativa Mérida, that offers to Mexico and Central America equipments, capacitation and technical and intelligence assistance, was made a pact in 2007 for the then president George W. Bush and Calderón.
For the fiscal year 2011, the president Barack Obama requested 410 million dollars for the aforementioned plan to Congress, of the ones that 310 million will go of to Mexico and the rest to Central America.
In the same audience, Gil Kerlikowske, EU’s antidrugs czar, you reiterated the view of Washington of than, like consuming country, United States attempts to narrow the collaboration with his international associates to reduce the drug trafficking to global level.
Those efforts you did not sole they preserve the public health and the certainty from our citizens, but also they help us to fulfill our responsibilities to help those nations that have seen themselves gravely affected by the use of drugs out of his frontiers, Kerlikowske said .
The audience on drug trafficking trasnacional and his impact in the certainty of United States and the global stability followed up on one that it accomplished the subcommittee in October of last year.
Publicado por delmar en 14:17