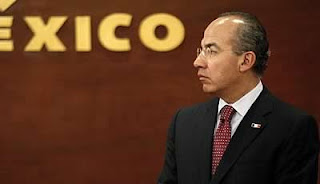 
President Felipe Calderón arrived this afternoon to Washington for a state visit in which will continue the dialogue on priority issues, particularly security, migration, border, competitiveness, energy and environment.

He reiterated the concern of the Mexican government for approval of SB 1070 in the state of Arizona, and highlight the importance of stewardship and development of a comprehensive regional framework, long-term goal.

The president arrived after a nearly eight-hour flight from Madrid, Spain, where he attended the Sixth Summit of Heads of State and Government of Latin America and the Caribbean-European Union.
President Calderon was greeted by the ambassador of Mexico in the United States, Arturo Sarukhan, as well as U.S. government officials in a brief ceremony in which they sang the national anthems of Mexico and the United States.

The Mexican president is invited to a state dinner offered by his counterpart, Barack Obama in the White House and deliver a message to a joint session of both houses of Congress, which is a sign of recognition of Mexico as a privileged partner.

The objectives of this state visit is to explore alternatives beyond possible legislative changes at the federal level, to generate conditions of full respect for the dignity of migrants and their human and labor rights.

Calderón Hinojosa stress the importance of the substantive contributions of migrants to the economy, society and culture of the United States.

It also seeks to advance efforts for the development of the border, to stimulate a new holistic vision of this gathering and opportunity for the two countries.

Similarly, will promote actions aimed at strengthening trade and investment, in the context of economic recovery.


The Calderón administration has an interest in the issue of climate change, so this visit will provide the political space to stimulate more and better avenues of cooperation for technology transfer, generation and renewable energy sources of funding to tackle this global challenge .
Publicado por delmar en 14:12