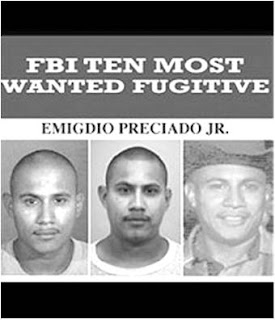 
Mexico delivers EU to 1 of the 10 most wanted delinquents for the FBI, the North American Emigdio Preciado Junior, accused to attack two policemen of California


Mexico delivered today to Government of United States one of the ten most wanted delinquents for Investigaciones’s Federal Bureau ( FBI, for his initial letter of a word in English ), an official source informed .
It has to do with the North American Emigdio Preciado Junior, of 38 years, presumed responsible of the attack to throws against two officers of the police of Whittier’s city, California, and that you left one of them, that was left with partial paralysis woundedly gravely.
Valued Junior, once the FBI for Matamoros’s north frontier, of Tamaulipas’s Mexican status was delivered to, you went stopped for the Mexican police five months ago in Nayarit’s status.
The presumed delinquent is required by the superior court of The angels (California ) to be presumed responsible of homicidal attempt, criminal association to commit an act of murder, to carry weapon of fire charged while a gang’s asset were participating and possessing a firearm conceals in a vehicle.
The September 5, 2000, Preciado, who was accompanied of another members of a gang fond of street wandering, attacked to throws two officers that gave them the height.
The gangster presumedly utilized a rifle of assault AK 47 and it shot 21 projectiles.
Publicado por delmar en 17:41